In 2010 and again in 2014, the people of Mecklenburg County chose Judge Smith to serve as North Carolina District Court Judge. 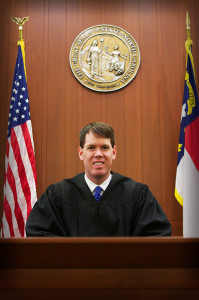 Prior to his service on the bench, he prosecuted criminal cases for six years on behalf of the State of North Carolina as a Mecklenburg County Assistant District Attorney.  As a prosecutor, he prosecuted a wide range of cases involving traffic matters, DWIs, property crimes, armed robberies, drug trafficking crimes, and violent felony assaults ranging to attempted murder.

Judge Smith is a Mecklenburg County native, raised in Mint Hill and south Charlotte.  He received his undergraduate degree from the University of Notre Dame and his law degree from the Villanova University School of Law.  He attends Christ Episcopal Church in Charlotte and is married to Tonya Graser Smith, a domestic attorney at GraserSmith, PLLC.  They are the proud parents of two wonderful children, Charlie and Leighton.